The transition from a centrally planned to a market-orientated economy has turned Vietnam into one of the fastest growing countries in the world. Annual Gross Domestic Product is growing at 6.9% making the performance of developed economies look pedestrian. 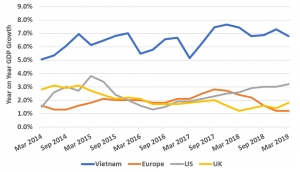 However, to keep ahead in a competitive world Vietnam’s internal payments system needs to keep pace with technology shifts underway globally.  As it stands, 95% of transactions carried out by the 94.7 million people in Vietnam are made using cash or gold bullion. For context, cash transactions in the UK represent 33% of the total of all payments for goods and services. Electronic payments, the development of contactless technology, ecommerce and electronic wallets is making cash increasingly redundant in the UK and globally too.

The lack of a digital infrastructure does, however, threaten to hold back emerging economies like Vietnam. The reason for this varies but in the main cash-based systems operate without a robust audit trail. This opens up the potential for tax evasion and corruption, which in turn puts a constrain on legitimate businesses from having access to the finance necessary to fund expansion. In a positive way this shortcoming has been recognised by the Vietnamese authorities and is being tackled, aggressively.

One of the biggest hurdles to overhauling the payments system in Vietnam is cultural. They have a young tech savvy population, with an appetite for smartphone technology, but only 31% of adults operate bank accounts. When it comes to borrowing the numbers drop even lower. Only 4.1% of adults have a credit card according to data from Standard Chartered as each generation pass on their fears of not letting cash out of their sight.

In order to counter the cultural aspects of preferring cash and gold, the government has made financial technology or fintech a top priority by adopting some extremely ambitious goals in a short space of time. They include raising the proportion of adults who have a registered bank account from 31% to 70% and bringing the proportion of transactions carried out by cash down from 95% to 10%. They have set a date for doing so – the end of 2020!

Three ways to reach their goals have been identified:

• Public services will be banned from accepting cash as a method of payment by December this year.

• Advertising to spur the use of electronic wallet technology; by firms who specialise in small, frequent transactions.

Without doubt Vietnam has adopted a real ‘can do’ approach by putting suppliers in the driving seat. The government have even accessed World Bank finance with an aid loan of $49 million to support the transition. The approach taken is fascinating, and one to watch alongside similar developments in Hong Kong. We wrote about this recently pointing to banking licences being granted to non-banks to spur fintech. However, contrary to what is happening in Vietnam the shift underway in Hong Kong is driven by increased consumer demand.

As with any shift in financial services it cannot be achieved without all having confidence in the system. This requires a robust regulatory framework. Undeterred by the challenge the Central bank of Vietnam is expected to present plans for achieving this to the government by the third quarter of this year.

With the required pieces in place Vietnam will be well positioned to link into the chain of global economic and financial development. They appear determined to not be left behind.